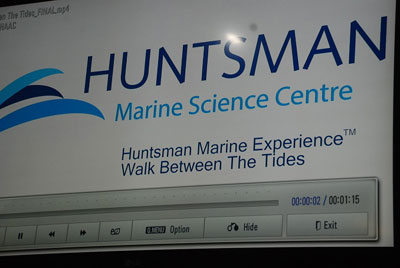 Our PROBUS CLUB had an outing on June 08th of 2022. Ten members ventured to the HUNTSMAN MARINE SCIENCE CENTRE in St. Andrews NB. Members that were able to attend were: Don LeBlanc our president, Chip Lawton, David Flewelling, Ron Pearce, Tom Craig, Brian Mitchell, Sid Lodhi, Ed Creaser, Paul Meier, and Don Mitchener. This followed up by lunch at the Red Tide Pub in downtown St. Andrews. Reports indicate it was very enjoyable. The most heard comment was  we should do this more often".

Tom Craig, our Phoghorn editor, made this statement in the August, 2022 Phoghorn: "This sign says it all. While my first visit was many years ago, it was entirely different. This facility has improved in many ways. We are lucky to have this nearby." 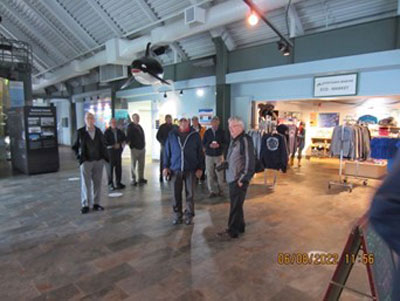 The ten Probus members gathered in the lobby before the tour commenced. 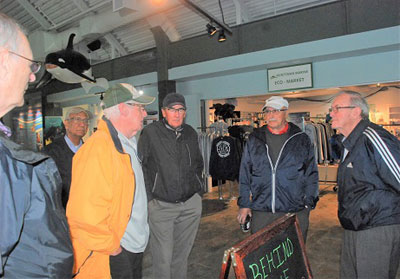 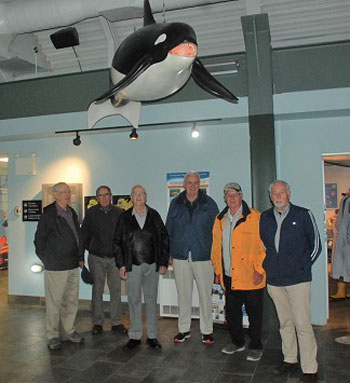 Did you know that Orcas are actually from the Dolphins family? 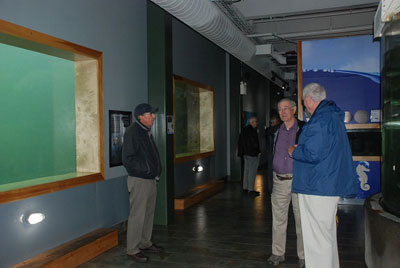 Chip Lawton, Ed Creaser and John Doyle engage in some conversation at the lower lever of the displays. 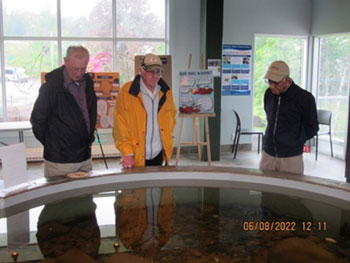 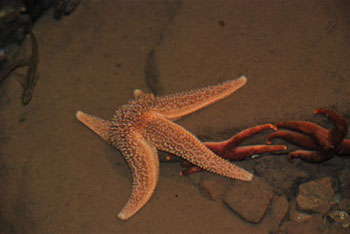 Members looking at the shallow pool where different smaller creatures are living in their habitant. Star fish is one. We soon found out that these are display only and no touching allowed. 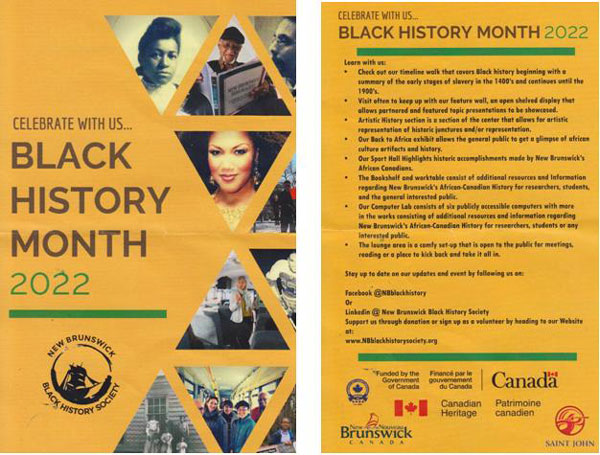 Locally in Saint John, a fantastic display and celebrating "Black History Month" 2022, was set up in Brunswick Square, uptown Saint John. It has been opened at this location since last June of 2021.

The local history pertaining to this area was presented by Ralph Thomas and assisted by Jemika Davidson. Local PROBUS member Carl White also assisted in the display over the last while.

The event was worth while and the Probus Club encourages everyone to take this tour in.

The PROBUS club was represented by some twenty-two members with six being from the Kiwanis Club. Some of the highlight's indicated settlements were remarkably close to Saint John with Willow Grove and Pennfield. This came as a surprise to most people there. At the conclusion of the tour, some eighteen members joined together for lunch at the Union Club, guests of John Doyle. A good day in all!

The following pictures will provide some insight to the overall history. 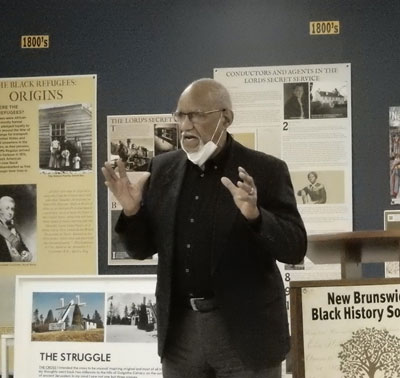 Ralph Thomas explaining the displays, which are organized by time periods to the group. 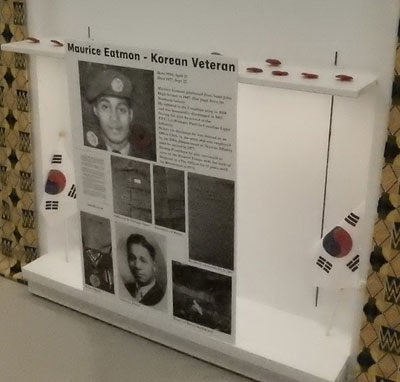 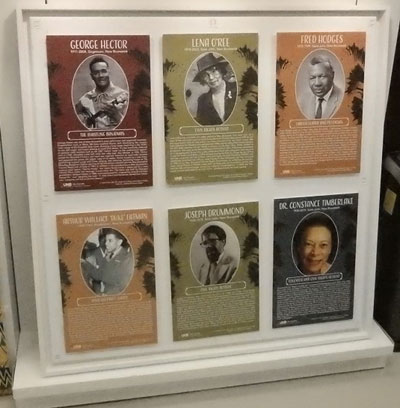 Pictures of local people that are well know in this area. I know three, says Tom Craig. How many do you know? 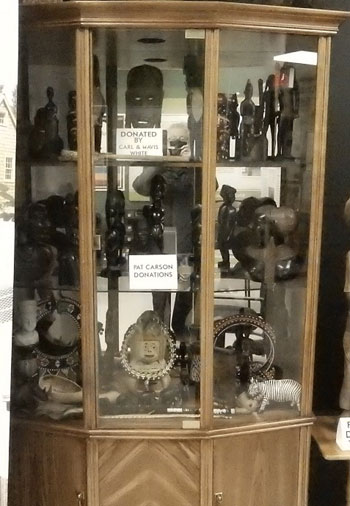 Items from the past dating back hundreds of years, donated by Carl . White and his wife Mavis along with Pat Carson. 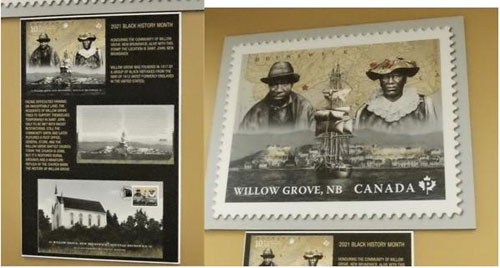 Willow Grove settlement is located in East Saint John. A stamp by the Canadian Government was issued in Jan. 2021 A well establish settlement was located there with a Post office, General store, and a Baptist Church. They tried to provide for themselves. The buildings are all gone but a miniature replica church was reconstructed. 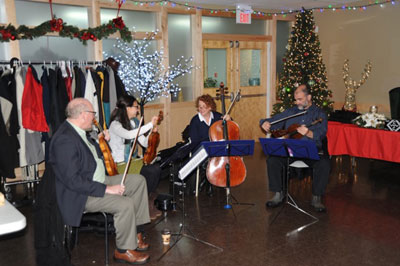 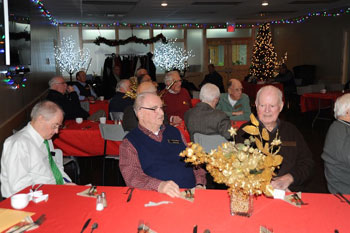 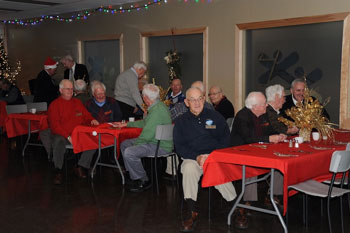 On Dec. 10, 2014, the Probus members gathered at the Boys & Girls Club for their annual Christmas luncheon, and to be entertained by the Saint john String Quartet which has become an annual delight. 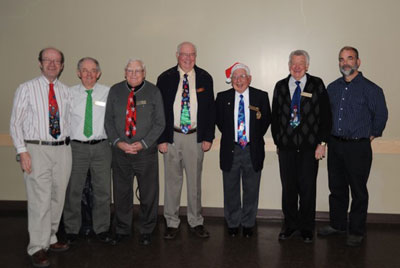 During the meeting, a first time ever Christmas Tie competition was held. Chris Buckley of the String Quartet entered his beard. The winner, Dale Stevens, is shown in the picture below with his prize which we are sure he will enjoy over the festive season. 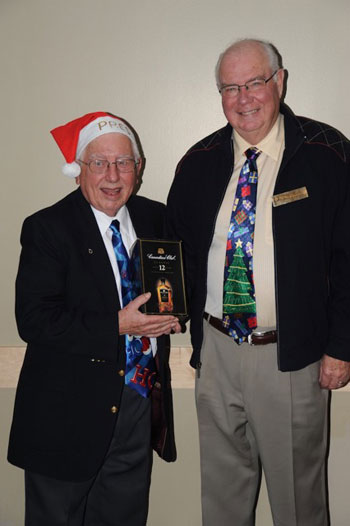 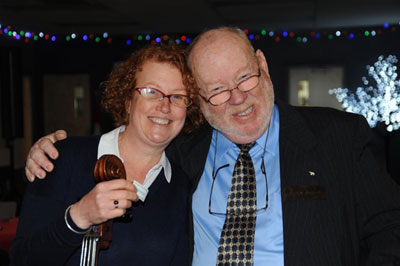 In the top left photo, President Ralph is sharing one of his growner jokes while on the left Tor Bordevik is seen doing a bit of fiddling with Sonia from the String Quartet. 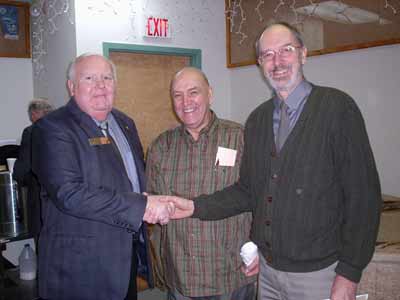 On Jan. 15, 2009 the Rendezvous 2008 organizing team met at the Mediterranean restaurant to wrap-up and share some laughs and successes for the rendezvous 2008 gathering.

The gathering was spearheaded by Co-chair Bill Brydges, and it was with great pride that he, Fred Shillington and President Richard Burpee advised that all was a success, both financially and socially.

The following summarizes the committees synopsis:

"The memories will last a long time but its time for our club to say thank you.

On behalf of Co Chairs Bill Brydges and Fred Shillington, we thank all those who traveled from afar to make Rendezvous 2008 the success it was.

We, the members of Saint John Probus Club, and the many organizing committees and volunteers, thank you all sincerely for sampling our Maritime hospitality and giving us the opportunity to make new friends.

We particularly thank those visitors from Australia who traveled so far to make this truly an International affair.

We thank the Directors of Probus Canada for all their help, indulgence and generosity and for giving us the opportunity to stage this event.

We thank our brother and sister clubs here in Saint John, in Moncton, Fredericton and Charlottetown for their cooperation and support.

We thank our sponsors the Royal Bank and Saint John Rotary Club for their financial support and to the many local businesses that helped us in so many ways.

All the reports have been made and a host of information is available to help whoever has the honor to host the next convention.

We would like to report that after paying all our bills that virtually all the seed money from Probus Canada will be returned with thanks.

To all the committee chairs and members who gave so willingly of their time for more than 24 meetings over the course of two years for "Cheap Coffee", Bill and Fred, thank you, sincerely. " 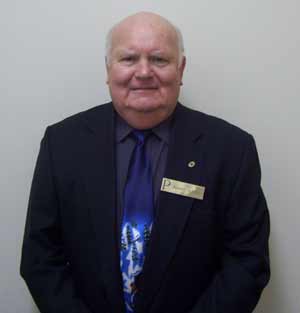 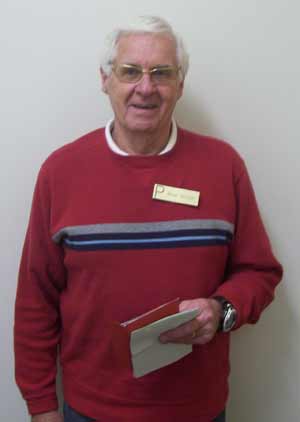 At the Dec. 2008 meeting, President Richard Burpee (top photo) was pleased to announce that Brian Mitchell (bottom photo) had accepted the position of Vice President and Program Director for our Probus Club.

The Club is very fortunate to have Brian step up to this position. We know he will do a great job!! 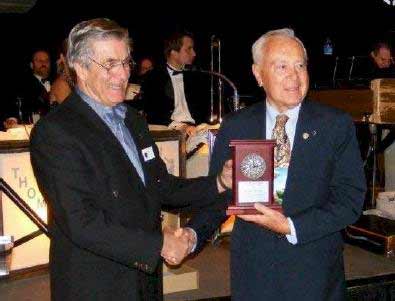 Probus Canada President Art Buck (far left) is very pleased to be presenting the John R. Morris Founders Award to a long time Probus Member who has definitely made his mark in outstanding support for the growth and development of Probus across Canada over the past 15 years as a member. Bill Brydges is a Charter Member and a Past President of the Probus Club of Saint John, N.B. He has also served on the Board of Directors of Probus Centre-Canada, Inc. doing so with dedication and commitment. He has also been involved in the development of new Probus Clubs in his area and most recently, without hesitation, successfully served as Co-Chair of the Probus Canada Rendezvous 2008 held in his community. 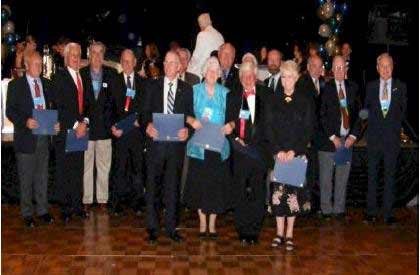 This happy group are Members of the Organizing Committee of the Probus Rendezvous 2008 held in Saint John, N.B. this past September. Having just received Certificates of Appreciation from Probus Canada President Art Buck (3rd from left) they have a right to smile at the success of a tremendous event. Just under 300 attendees took advantage of Saint John hospitality to enjoy three days of fun, fellowship and idea exchange in Canadas Loyalist City. Survey returns are already in and, with few exceptions, they express feelings of great satisfaction and enjoyment with lots of opportunity for business as well as sight seeing and just plain good times.

It's hard to believe that we're at the end of another year--and boy what a year it has been. Our efforts across this Country have brought us to 200 Clubs, . the "long sought after" number and now we can set our sights on a new target  perhaps 250.

My thanks to all who helped to make this growth happen and may it continue ! And Rendezvous 2008---Catch the Wave---held in Saint John N.B. in late September, which turned out to be a "super" success. The ---food--- fellowship--- entertainment---tours---and not to forget the discussions & the comments from the workshops---left us with much pride about the benefits of belonging to such a great group called PROBUS.

I personally met so many from across Canada who commented on their pleasure at being involved with our organization. Our Board will be discussing many of the recommendations brought up during the workshops, particularly those dealing with improved communications, and sharing more information between Clubs.

A very sincere Congratulations to the Saint John Clubs , their non Club volunteers---and to all our members who were there to enjoy their efforts. 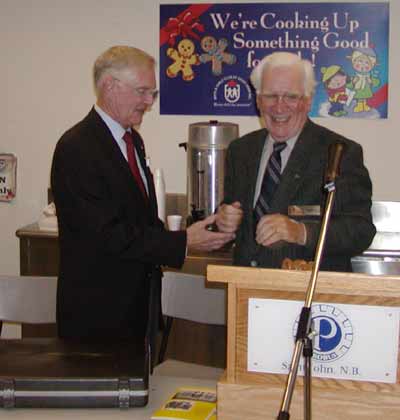 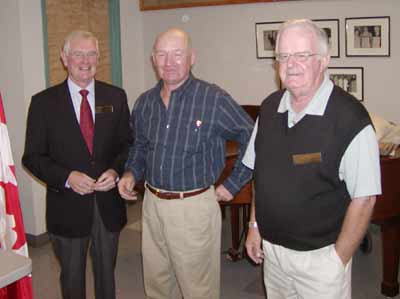 One of President Dave's last chores was to induct new member Frank Setchell (center) to Probus. Frank was sponsored by Fred Shillington (left). 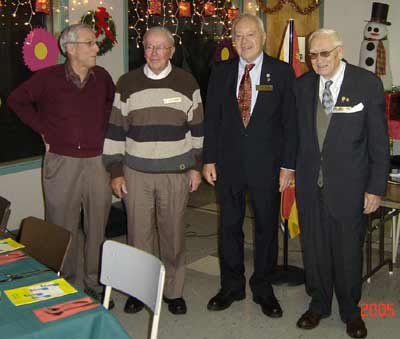 At our Christmas luncheon on Dec. 14, 2005, President David recognized our Charter Members with special name badges. Pictured above are the initial four Rotarians who did the ground work to invite 44 gentlemen to a meeting to discuss the creation of a Probus Club. Pictured above are Gordon White, Gerald Barnett, Bill Brydges, and Canon Lloyd Lake. Of the 44, 43 signed as Charter members. 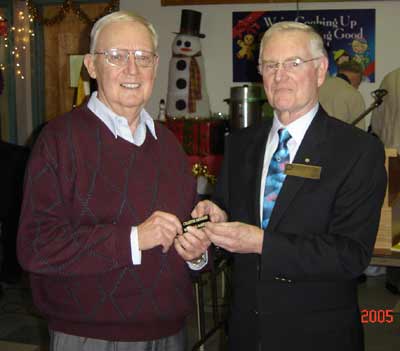 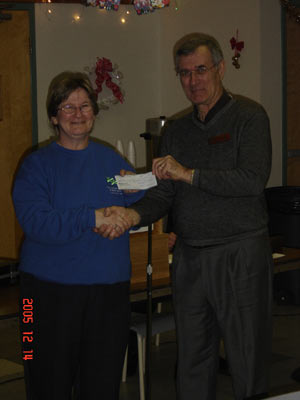 During our luncheon, Treasurer Ed creaser presented Debbie, Cooper, the Boy's and Girl's Club Executive Director, with a cheque for $500.00 for Probus' Christmas Donation. 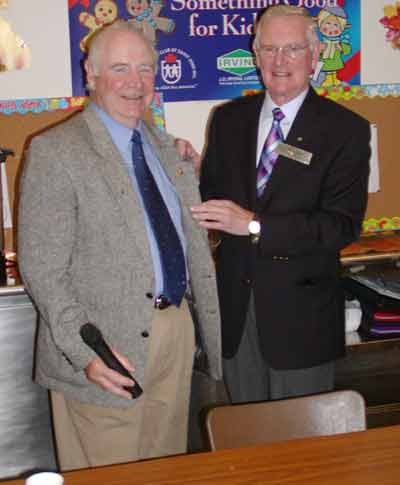 On the Sept. 21, 2005 meeting of Probus at the Boys' and Girls' Club of Saint John, the new executive for the new Probus year were voted into office. Pictured here is incoming President David Lester presenting out going President George McCaughey with his past president's pen.

At each meeting, time is set aside for a guest speaker. As you will see from the list below, our Club has been very fortunate to have excellent speakers each month.

As a memento for speaking, the Club photographer presents the speaker with a photo of his talk. Some photos of our speakers may be seen here.

Fellowship and laughter is a big part of each meeting. Here are a few pictures of the weekly meetings for your preview.

A highlight of each year is when the Club membership make a field trip to a location of interest. It may be to the Atlantic Salmon Federation, Irving Oil Refinery, the Hillsborough Train Tour, or some visit yet to come. Please have a look at the field trips.